These are the jigsaw pieces, or pixels, which were rejected by conceptual glitches in the process, leaving dead pixels/empty spaces in the images. 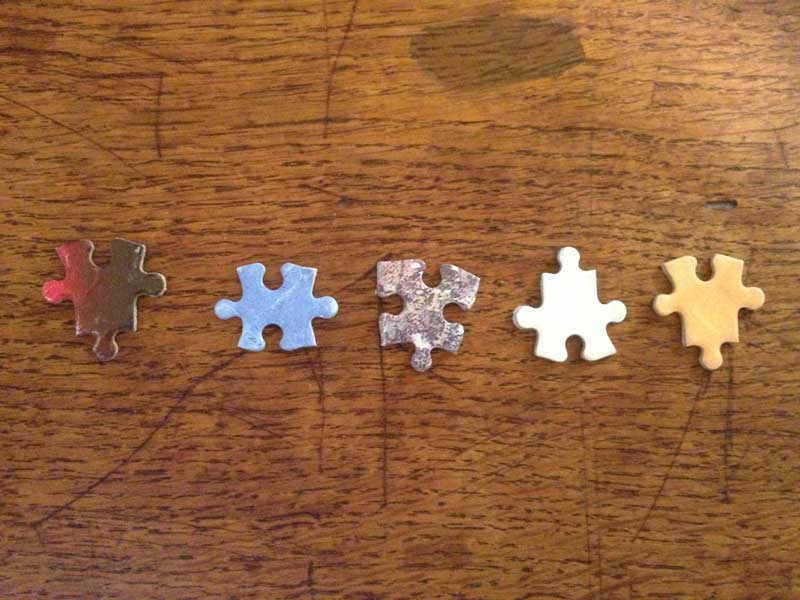 They are discrete pieces of information which never arrived at their intended destination.  In a digital process, they would have disappeared off into the ether, but these physical pieces are trapped in purgatory (my wallet).

I’m not sure what to do with them.

“All decisions are beforehand, so execution becomes a perfunctory affair.”

Circuit-bent jigsaw #6 brought with it a quandry.

The rest of the pieces having formed the 5 other jigsaws, there would be only one piece to fit into each grid position, or pixel.  Practically speaking, there was no need to roll the dice, because only one piece was possible.  I would be able to see where the next piece should come from much more easily than in previous weeks, so it should be much easier and faster to complete #6.  So, no need for the dice.

This, for some reason, did not initially feel particularly at odds with the process.  This last generation would simply be a matter of “tidying up” the leftover pieces into the final finished image.  But by that rationale, it would be fine to take a clump of joined-up pieces and add them to the new image as a group.

This most definitely did not feel right.  I had somehow lost sight of the fact that that what the system would do is carry on precisely as it had been operating for the previous five generations, throwing the dice and beginning the search at the given starting point and searching in a clockwise manner.  It became clear that I must continue to follow the whim of the dice, ignoring my own observations as to where in the room the relevant piece was located (thankfully my memory is so poor, this was not as frustrating as it might have been).  Though this process would have no effect on the image, it is the only constructive process that had been put into place, and therefore must be followed, ignoring the human urge to speed up the process by increasing efficiency and inventing shortcuts.

The system is indifferent and immune to these gestures towards innovation.

2) to put into place the conditions under which true conceptual glitch, i.e. unplanned accidents, could occur and possibly be recorded in the images.

At times, I have felt like a physicist deep underground, waiting to observe and document an elusive particle that exists up to now only in theory.

Over the course of the 6 jigsaw generations, two types of glitch were observed:

Secondly, in #3, the glitch at B20.  This occurred only once across the 6 performances.  In short, because of the irregularities around the centre line (again, explanation in this post) there are possible “big versions” and “small versions” of all of those pieces bordering the 20/21 columns (just as is seen on the jagged edges of each jigsaw).  On this occasion, a perfect storm occurred in which all of the surrounding large versions were chosen,  encircling the B20 grid position, making it too small to enter the piece.  Information rejected.  Dead pixel.

#3 is the only jigsaw to contain both types of glitch:

…were made by JHG Jigsaws, who were the only company that I could find who could cut all jigsaws along the same pattern.

I was given a list of those images that were possible, and I drew lots to choose the six final images.  It was important that no aesthetic judgement was allowed into the process. 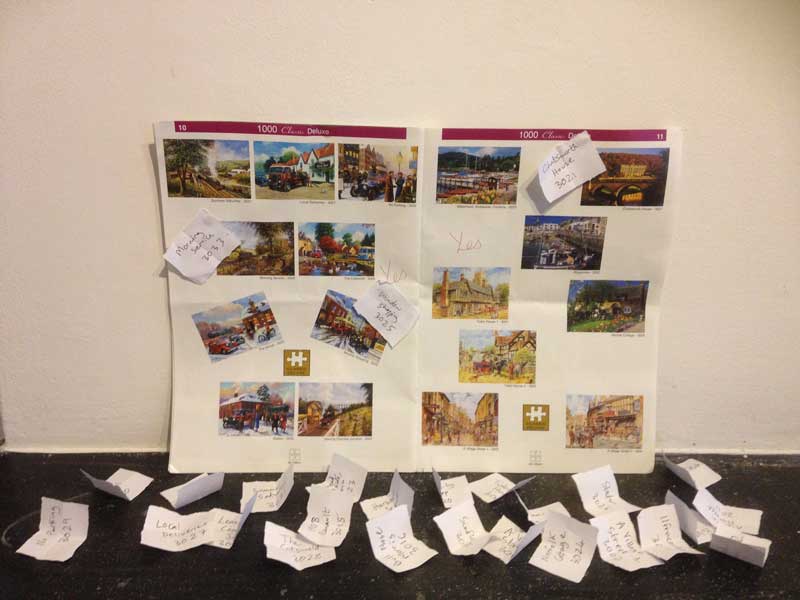 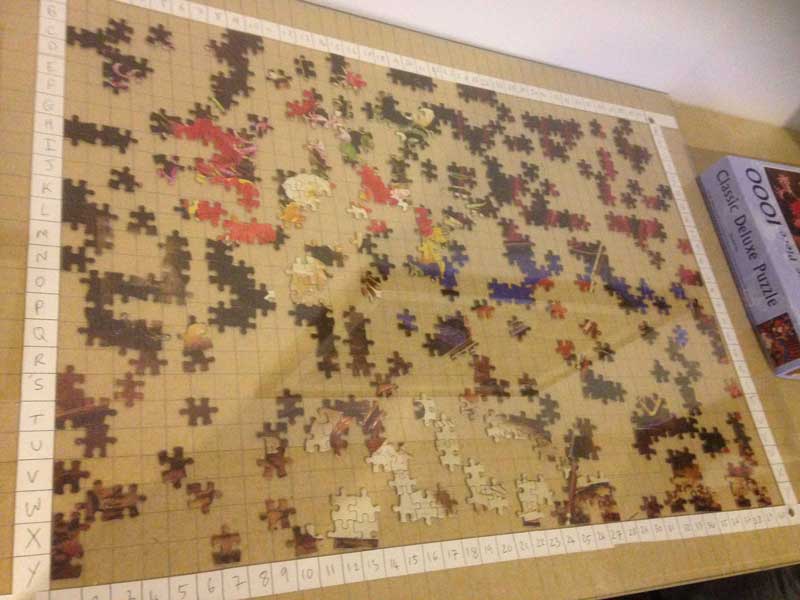 Following the construction of Circuit-bent jigsaw #2, I had a very interesting chat with Cognitive Scientist Tom Stafford, who pointed out how the piece draws out the underlying statistics of the scenes commonly framed by pictures:

“By rearranging the jigsaws, you destroy the meaningful interpretation of the scene, but continue sampling from the same underlying distribution (which is, as a consequence, highlighted, since the coherent interpretation of a scene is no longer there to distract)”.

He put me on to this research which shows that “scenes”, whilst they may contain different subject matter, generally adhere to a set of principles of composition which are revealed in Circuit-bent jigsaw:

The above images were generated by compiling hundreds of images which conformed to each of the broad subject categories. Though there are variations between natural and man-made environments, scenes are generally lighter at the top, conveying the light source of most environments whether natural or otherwise. They are also constrained by human perspective and as a result are usually viewed from a human standing height. Scenes which involve greater distances tend to be anchored on the horizon and feature smoother textures as visual “clutter” decreases.

These principles can be seen in the Circuit-bent jigsaws, with lighter shades appearing at the top of the images, and the viewer’s eye drawn in to the central, distant point. Though the individual units of the scene have been stripped of their semantic or contextual attributes, they still adhere to a set of predetermined rules, which are retained in the randomised images.

If you’ve been wondering how many different possible combinations of images there are, there are…….