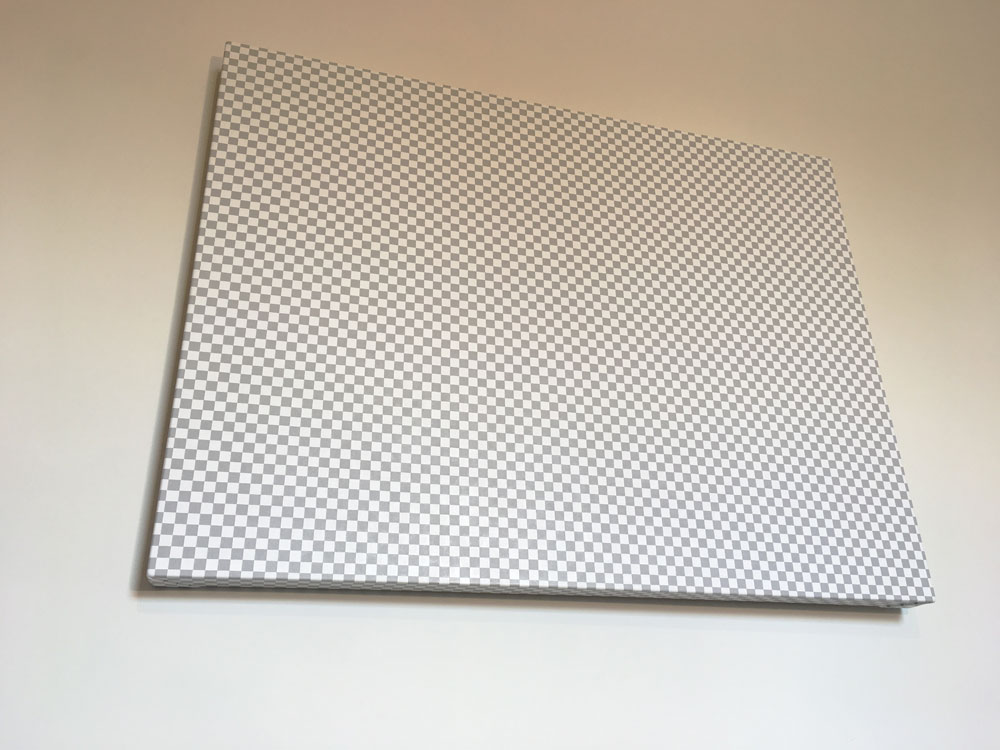 The next step for the Monochrome

Single-colour monochrome paintings have a long history, and they keep cropping up, in different colours and with different motivations, from Malevich’s mystical, religious gesture of Black Square, to Rodchenko’s Red, Yellow and Blue “Death of Painting” statements to Yves Klein’s pure, blue, Zen objects for contemplation to Rauschenberg’s White Paintings, mirrors to the society which brought them into being. These blank canvases are most closely related to this last example. The Photoshop blank canvas is the natural progression for this phenomenon in the digital era. Although they are not monochromes in the sense of being rendered in a single colour, they represent the same depiction of emptiness, or blankness, and so for this reason they are best seen as conceptual monochromes. 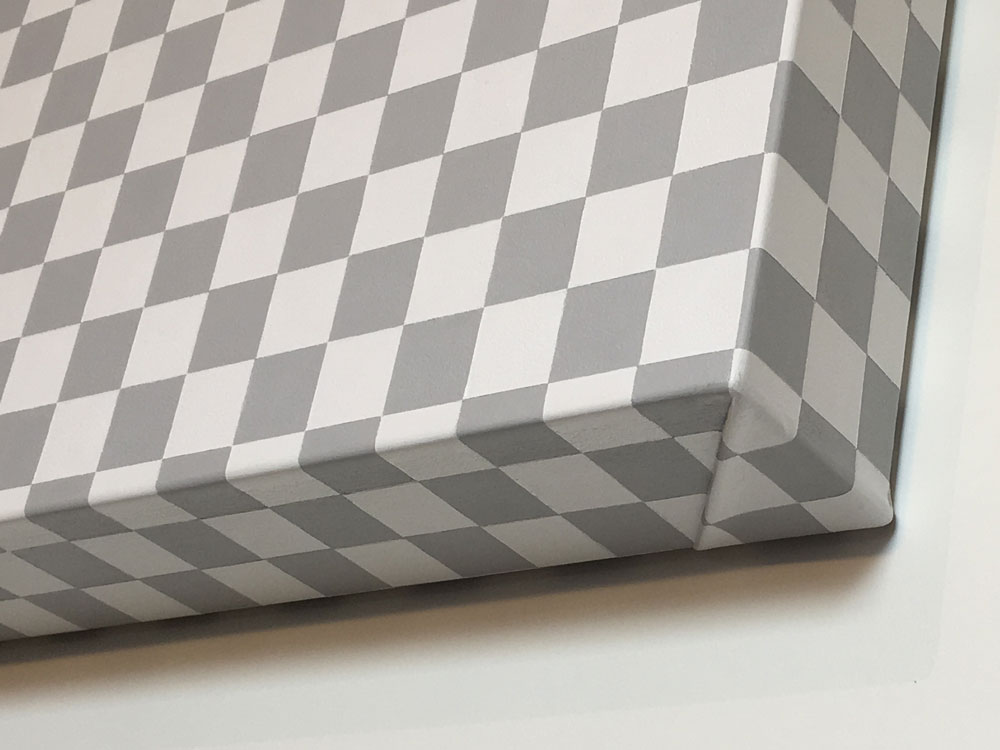 Rauschenberg himself said that a canvas is never empty. Is a blank photoshop canvas more distracting than a physical blank canvas? Can it not equally be a meditative space? If not, or if so, it only says more about our relationship with media. John Cage famously described the Rauschenberg White Paintings as “airports for lights, shadows, and particles”. They reflected the conditions under which they were being viewed in an immediate sense, but also mirrored the structures and conventions of the surrounding society. If a blank canvas is never blank, how much less blank is one made from a more advanced technology? Does this mean we are getting further away from the void, from the object of contemplation, even from the self? If the paintings depict an absence, is the act of painting them an “additive subtraction”, as Jasper Johns said of Rauschenberg’s Erased de Kooning Drawing? Picasso also said that “Every painting is a sum of destructions: the artist builds and demolishes in the same instant”. There is huge addition in the application of paint, in order to reach the point of the blank, so my painting of this blank is simultaneously an act of erasure, as though I am deleting an image which existed digitally. If I start with a physical blank canvas, and I add digital absence, what must have been there was a digital presence. We will never see it, but it was there. And it looked like a physical blank canvas, because that is what has been deleted. If the purpose of painting these canvases is in order to represent nothingness, I can not create nothingness by adding to it. So I must be erasing something. What is it that I am erasing? It must be a digital image. What must that digital image depict? It must depict the thing which is being destroyed in order to create that representation of nothingness, i.e. a physical canvas. 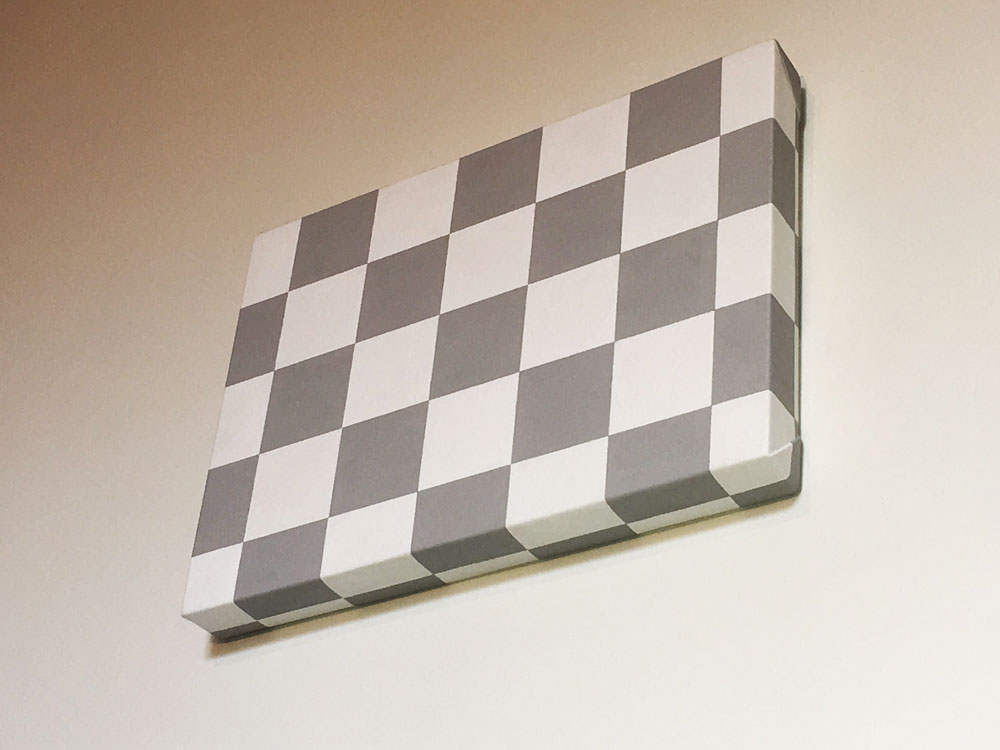 I have wondered whether the photoshop blank canvases would be best viewed on a screen in their original digital format, as found objects. However, I’m not sure that would do much in terms of highlighting the properties that I’m interested in. It’s the process of taking the digital out of its context and rendering it in physical materials that draws attention to its digital-ness. It’s the act of representing the nothingness which draws attention to the nothingness, not the nothingness itself, even though the representation of nothingness involves an awful lot of somethingness to achieve it. By changing the medium, you highlight that you are representing the absence on top of the medium, and not the container. How effective are these containers in containing nothingness? Is the absence on top of a digital monochrome “purer” than the absence on top of a physical canvas? It also can’t fail but be about imperfections. In the face of the hundreds of hours of labour, the imperfections are stark. It will never be as perfect as a digital blank canvas and as such it is a persistent reminder and a proof of human fallibility.

Concerning the translation of digital to analogue specifically, things like the giphoscope (a physical machine for viewing animated gifs in printed form) highlight the fact that we still value the physical object highly, and that to (literally) set it in stone remains a powerful indicator of worth and permanence. The fact that there seem to be so few archivists like Dragan Espenschied and Olia Lialina preserving digital culture indicates how little digital culture is regarded more widely. There is an undoubtable element of reverence in rendering this digital state of blankness in physical form. 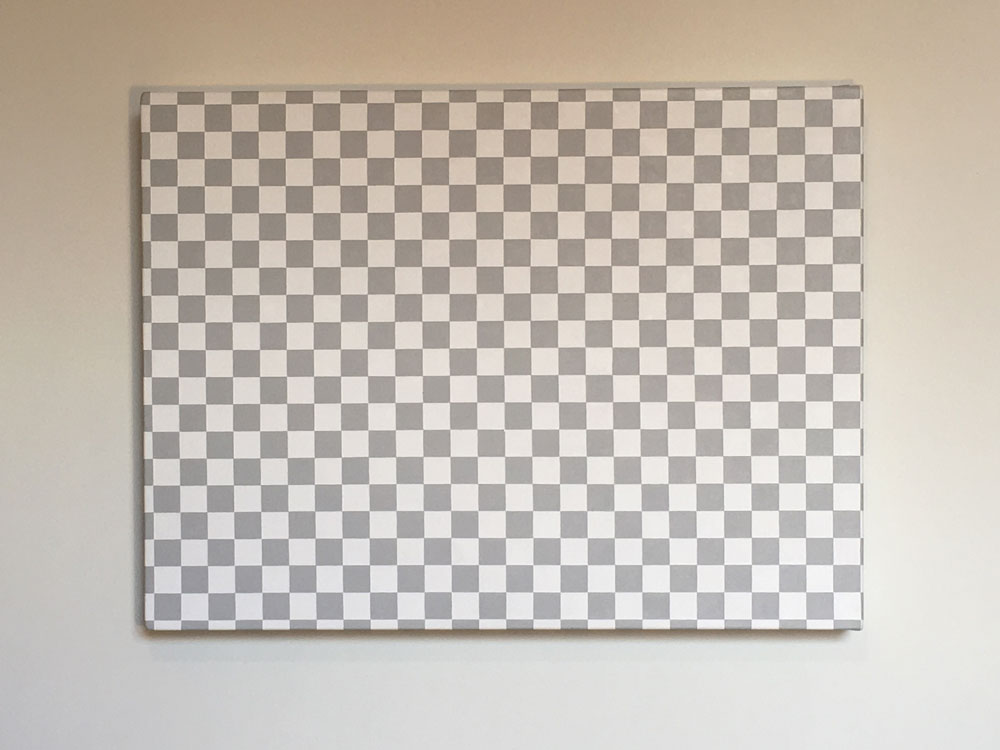 Digital space can seem very flexible, limitless, without scale, but it’s difficult to really feel this because we witness everything through the screen, through this fixed window. So by bringing these spaces into the physical world, we get a better understanding of that flexibility, of that sense of scale, and of a sense of shifting proportions that affects us physically in a way the digital environment doesn’t. As you look from one painting to the next, you are pulled and pushed into and out of the images. Your physical existence in terms is altered in comparison with the parameters set by the canvases and you can find yourself dragged around the room. The physically-rendered canvases are a constant – it is you who grows and shrinks.

These paintings have been created in a historical context which finds populations in a state of perpetual anxiety over a post-truth future, about what is real and what is fake, and craving the dependable realities of the immediate and physical. The obsession with retro/vintage goods which possess comprehensible, analogue, physical properties is ubiquitous. Apps which fetishise everyday physical acts in a digital form are common, whether throwing rolled-up paper into a bin or clipping the branches of a bonsai tree. They are dreams of a physical past which now seems unattainable.

On the one hand, I feel that these paintings slow everything down. They ground you. They are an isolator against information anxiety in that they grasp, tame and render the infinite as finite.

However, these representations of this unending, digital space can simultaneously be seen to dwarf the viewer. They engulf the viewer in the sublime and terrifying and wonderful experience of being confronted with infinity: an infinity of potential and an infinity of emptiness. This infinity is indicated by the fact that the paintings continue over the edges and around the folds of the canvas. This duality of meaning highlights the hybrid status of these works. 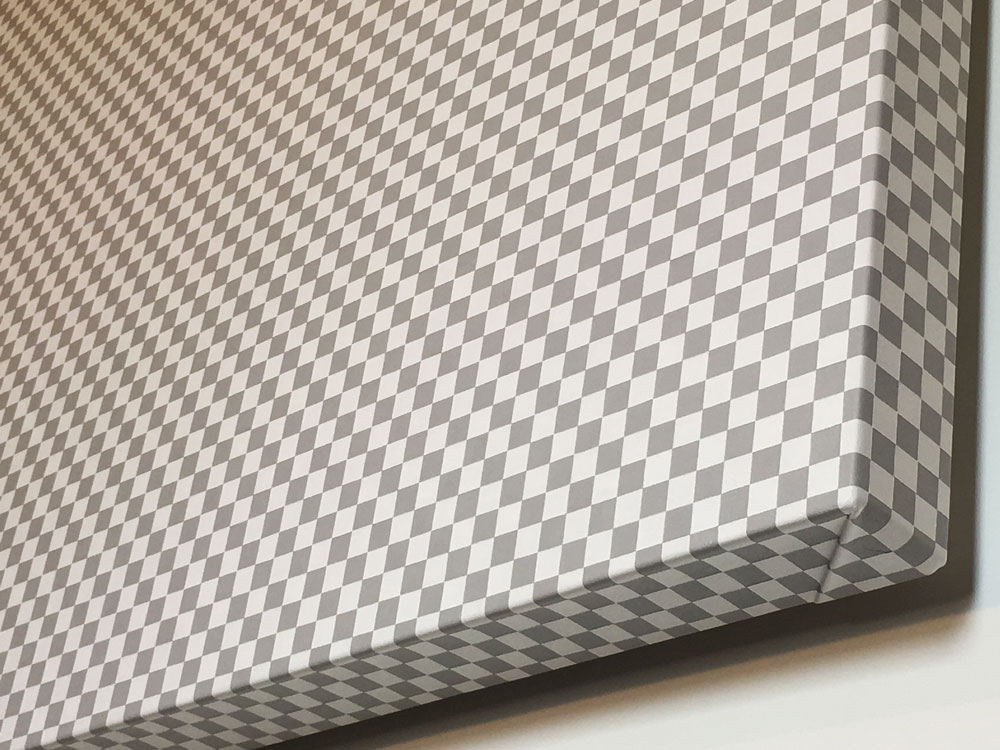 Rothko, Pollock & others started making paintings that were not windows into the world but objects. The art became the reality – the object in itself. Are these a window into another world? Do they refer to something outside the picture? Or are they objects in themselves to be contemplated for their properties? That is, do the paintings refer to an absence or a depiction of absence? On the one hand, they must be windows into a world because they depict a digital reality which we are familiar with and can experience. There is no way of telling whether the canvases depict digital space which is unattended or erased, as they are visually identical. Are the images of a digital palimpsest, containing metadata of past additions and subtractions, or are they a pure form of absence, devoid of any artistic gesture? They are also objects – they look like Op Art objects, and they certainly play with the eye. If the thing they refer to is an absence, if it isn’t there, then they must be objects. They represent a nothingness in that they seemingly depict a blank canvas, an absence of work, waiting for an action, pregnant with the expectation of a creative act. The subject of these paintings may be the surface layer, or it may be the emptiness which exposes the surface layer. Are actual Photoshop blank canvases themselves a window into a world? They seem to refer conceptually to physical blank canvases, but I think you could argue they are the end point (and beginning point) – the object to draw on in itself, not a reference to something else. The thing which you draw onto it is a window, but the canvas isn’t, whether it’s physical or digital. What you draw onto it determines if it’s a window or an object. If you draw a picture of a happy dog, it’s a window. If you go all abstract expressionist on it, then does that digital image become an object?

I suppose the answer to all of this is that it’s both and that’s why it’s a good evocation of what we experience nowadays with our digital/physical spliced up worlds. The state of the image depicted is unknown. It is either the beginning point of an act of creation or the endpoint of an act of erasure. It is unknowable in a way that Erased de Kooning Drawing is not. Erased de Kooning Drawing is clearly the endpoint of an act of erasure. The Conceptual Monochrome is a painting of a cat which is simultaneously dead and alive. 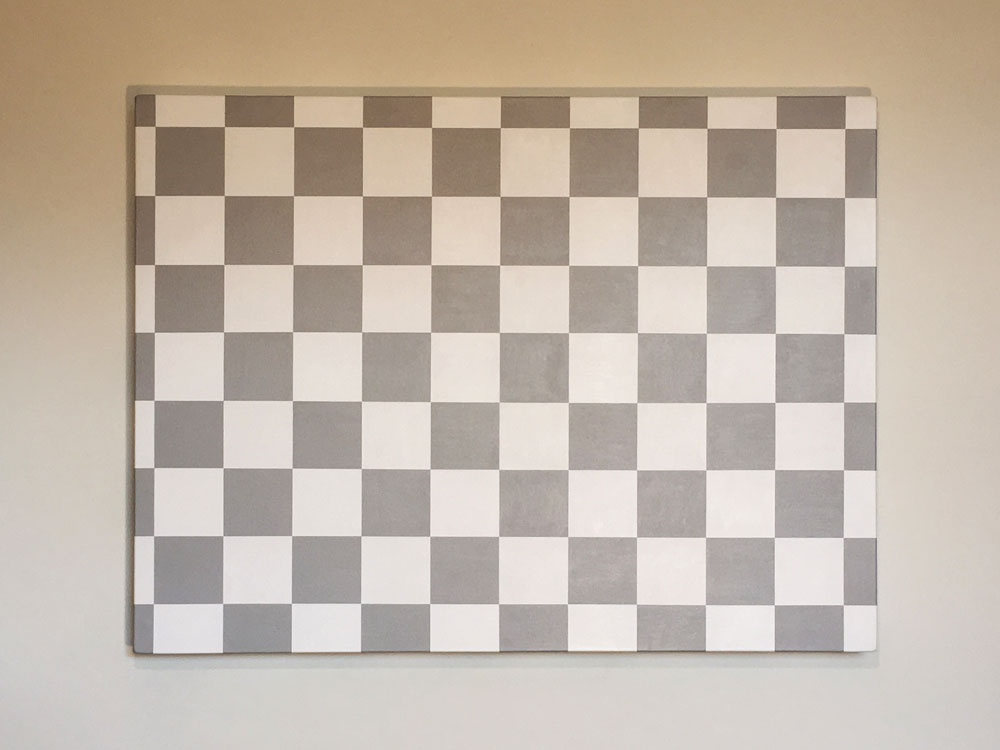 In relation to the canvases, (physical) objects placed in front of them take on an unreal (digital) appearance. Edges are sharp and stand out prominently (as is intended by the software design) against the chequered background. This causes (real) physical entities to appear digital (unreal). This effect is highlighted further when an object/person is photographed in front of the painting, creating a new layer, flattening the image and actually sending the subject back into the digital realm. 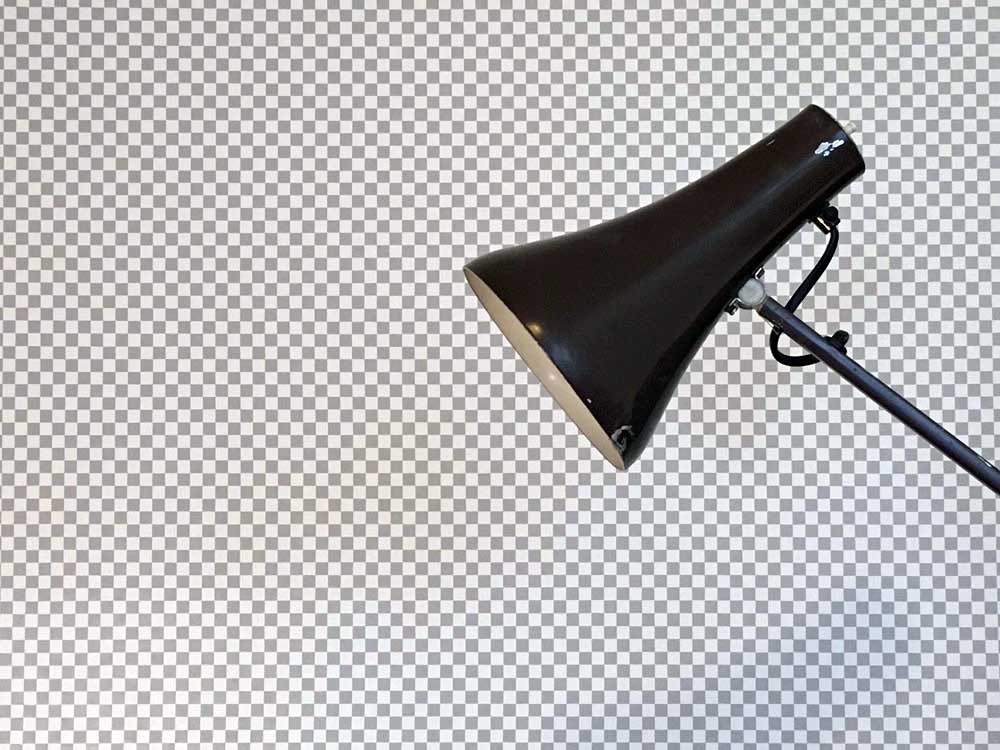 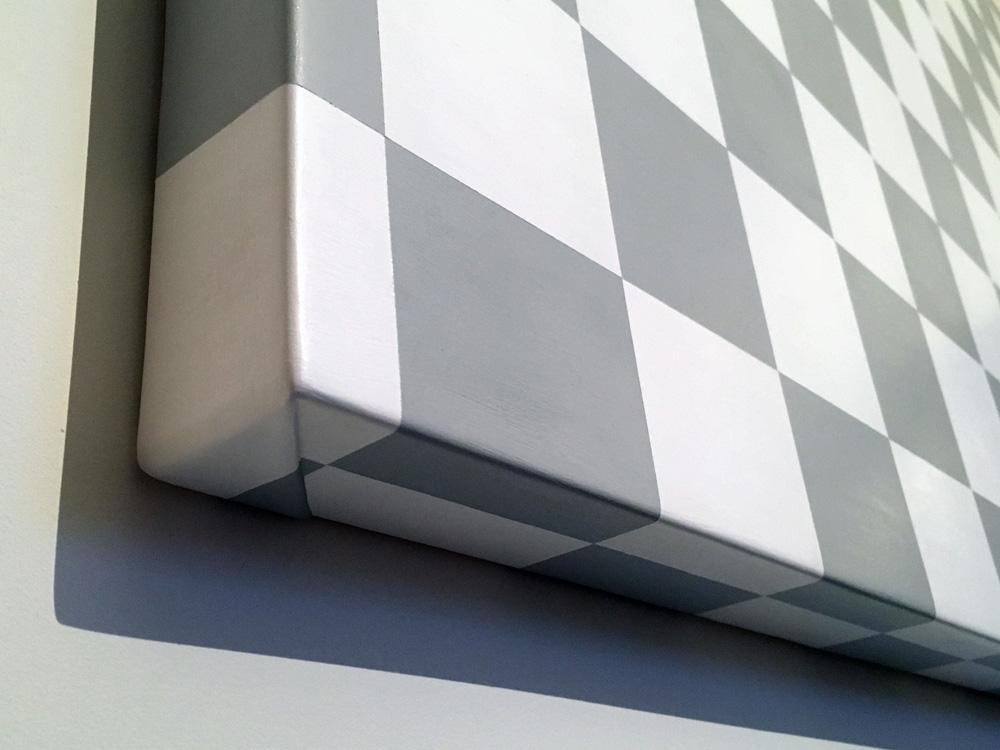